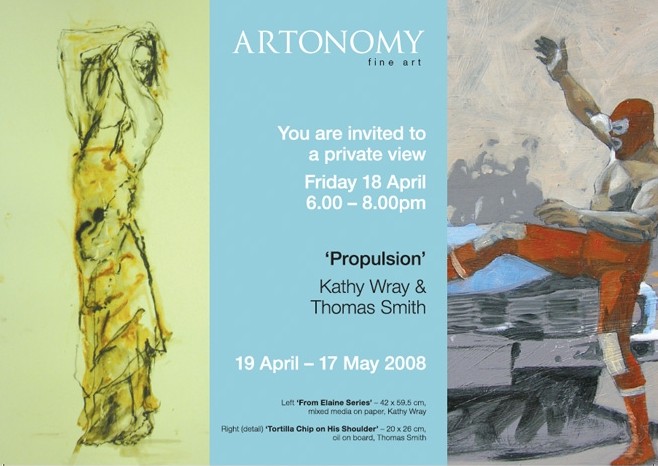 There’s a special dynamic to a two person show; a certain tension or balancing of what can be two very different talents. At Artonomy in Truro ‘Propulsion’ is just such a show exhibiting, as it does, the work of Kathy Wray and Thomas Smith, both young artists recently graduated from Falmouth. For Elaine Hayman from Artonomy the dichotomy is a bonus not a problem. We have a large space here and I’d hate to put younger artists under pressure to fill it. When I first saw Kathy’s work I was really excited by it; I was already familiar with Thomas’s paintings and could see how they would work well together. It’s a terrific opportunity to show the public something new, fresh and different.

Both artists are figurative but approach the subject of the human form in very different ways. Kathy Wray is up front and immediate, dynamic both in the way she represents the figure and in the way she utilizes line to express movement and emotion. Often she uses herself as a model either reflected in the mirror or from photographs, but these are no angst ridden self-portraits, her interest is in how the body moves through space, her experience in dance and fashion illustration informing her light and fluid touch. In her drawings she uses ink, watercolour and red chalk on cartridge paper; in her prints it is with the immediacy of drypoint, softground etching and monotype that she is most at home.

Thomas Smith graduated from Falmouth in 2005 since then he has exhibited in several group shows, participated in the Tate St Ives / Creative Skills mentoring scheme and was shortlisted for the John Moore’s painting competition. He works in oil on board or canvas with a pallette of soft blues and greys often highlighted by a motif in red. He is no less interested in how the body disports itself especially in unusual ways but his figures are placed in context, often reflecting surreal or dreamlike themes. He plays with words and juggles ideas to make visual puns: a suited worker (a device he’s used in the past to represent the compliant unthinking worker) wears a box to cover his head; he’s literally ‘boxed in’. In ‘Tortilla Chip on his Shoulder’ a Mexican wrestler mindlessly kicks at a damaged car; it is a borrowed image which pays homage, as he acknowledges, to Pop artists of the 60s, citing Peter Blake as a particular influence. Witty, cerebral and post-modern as these images might be, they also work purely on a visual level and are hugely satisfying to look at – surely the mark of a worthwhile painting.

Good figurative art is not always the norm; by bringing these two artists together Artonomy is demonstrating that as a genre it is alive and very much kicking in Cornwall.

From Inside Cornwall Magazine

This site uses Akismet to reduce spam. Learn how your comment data is processed.